ORGKHIM, Russia, announces the start of construction of its plant for production of non-carcinogenic («green») extender oils for tires, synthetic rubbers and rubber compounds in Malaysia. 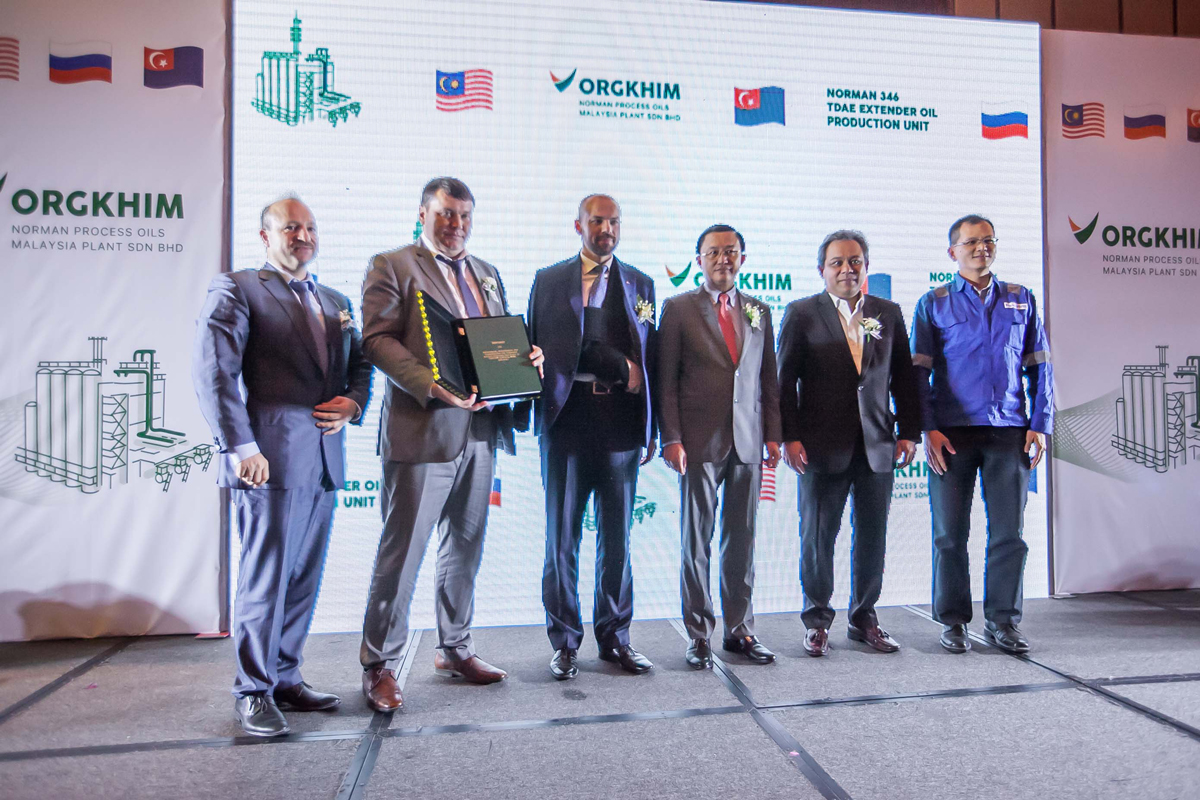 February 12, 2018, Johor, Malaysia. A groundbreaking ceremony at Tanjung Langsat marked the official start of construction of a plant for production of non-carcinogenic («green») extender oils used in tires, synthetic rubbers and rubber compounds.

The project financing totals USD 57,2M, whereof close to 80% will be provided by Gazprombank (AO). The EPC contract for the Project was awarded to Malaysian “Esstar Vision” Sdn Bhd, and in February this year the Contractor started earth works on the land plot, acquired by Orgkhim back in 2015. The turn-key completion of the plant is scheduled for Q2, 2019, and the company expects to start shipping locally produced extender oil NORMAN-346 to its customers in Asia-Pacific in H2 that year. The plant’s minimum output of commercial non-carcinogenic processing oils will be 50,000 mt/year, which should add some 60% to the company’s overall production volumes. Throughout the construction, commissioning and operation stages Norman Process Oils Malaysia Plant, Sdn Bhd, local subsidiary of Orgkhim, will create some 70 new employment opportunities in Passir Gudang.

The product portfolio of the future plant will feature an extensive range of the company’s flagship “green” extender oils “NORMAN” (TDAE, TRAE, MES and NLP, a special oil type) for tires, synthetic rubbers and rubber compounds. At the heart of the plant will be Orgkhim’s patented highly effective refining process, which the company has successfully employed for over 10 years at its base production cluster in Russia. In addition to the production grounds, the Tanjung Langsat project will also include a new tank terminal for incoming feedstocks and end products, designed with an in-built capacity for expansion for commercial purposes.

According to Nikolay Khodov, Orgkhim’s CEO: “This investment project will be our company’s first full-cycle production facility outside of Russia and will serve as an excellent example of support given to Russian investments by the government of Malaysia.”

Speaking at the event, Datuk Tee mentioned in particular that Malaysia’s state Johor shows the best development dynamics and its government welcomes Orgkhim Biochemical Holding’s project which brings a cutting-edge production technology and new employment opportunities to the region.

Datuk Azman, in his turn, spoke an encouragement to all other Russian investors, to follow Orgkhim’s example, and venture with new projects in Malaysia assured of his Department’s full support, including in Johor – the country’s third state in terms of investments.

Mr. Evgeny Kogan noted: “Gazprombank’s financial involvement in this construction project is fully in line with the Bank’s strategy to support enterprises promoting innovative “green” technologies. Gazprombank will continue to support its partners in implementing production expansion and product promotion projects both in Russia and abroad”.

According to Alexander Ushkov, Gazprombank’s Project and structured financing department manager: “Our team deployed the best of our expertise to structure the financing facility in a manner that enables our client to capitalize at the best on the Malaysian investment opportunities and just as fully guarding the lender’s interests at the same time”.